November 4, 2022
Why there's more to life than making it to a ripe old age
Medical advances mean reaching 100 will soon become commonplace. But unless we're in good health, is it really worth it? How long we live and the quality of life we have could soon change thanks to new science. Photo: Getty / Nick Donaldson / The National

That is the opinion of Dr Jose Cordeiro, the vice chairman of Humanity Plus, an organisation whose mission statement is to advance science and technology for a better future and expand human capabilities.

He was speaking at the recent Dubai Future Forum, a conference that discussed immortality, life expectancy and technological transformations in health care. At its core was the question: “Do you really want to live for ever?”

There is no definitive answer to the question, and most people would certainly not want to live longer just for the sake of it, especially if you were beset by chronic illnesses such as dementia and heart problems, which are commonplace in the elderly. What would be the point?

But if you could be guaranteed a healthier existence with all your faculties intact and with disease held at bay by the pioneering treatments in development — designed to “unlock time” — would an extra 20 or 30 years not be attractive? Dr Jose Cordeiro at the Dubai Future Forum where he told guests that humans would soon be able to live forever. All photos: Khushnum Bhandari / The National Dr Jose Cordeiro with his book on immortality called 'The Death of Death'. 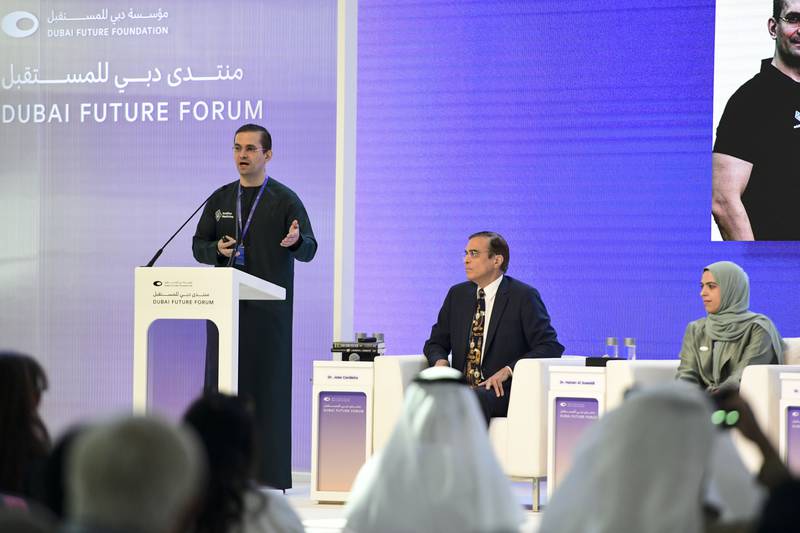 The panel discuss the likelihood of people living forever. 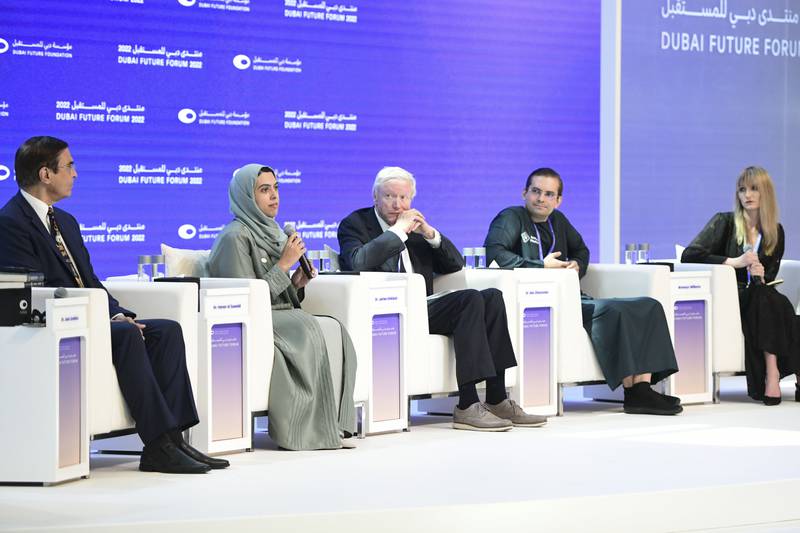 Many people would probably say yes, with caveats about quality of life versus quantity of life.

Whatever your opinion, living longer is fast becoming a reality. The average American born in 1900 had a life expectancy of 47.3 years. Thanks to modern medicine, in 2022 that figure is now 79. That upwards trend is just the beginning.

According to a 2009 article published in the British medical journal The Lancet, about half of all children born in the US in 2007 are expected to live to 104. And that might only be the start.

Prof Heather Whitson is the director of the Centre for the Study of Ageing and Human Development at America’s Duke University.

“At an ageing conference I recently attended someone on the podium said the first person to live to 150 had probably been born. We all looked at each other and you could see we were all thinking, ‘I hope it’s not me!’”

He said that those who make it to 2030 will gain one year for every year that they survive, he believes that rejuvenation technology will be available by 2045.

The point, he said, is to use artificial intelligence and robotics to transform the pharmaceutical industry and discover drugs that could help people live longer. 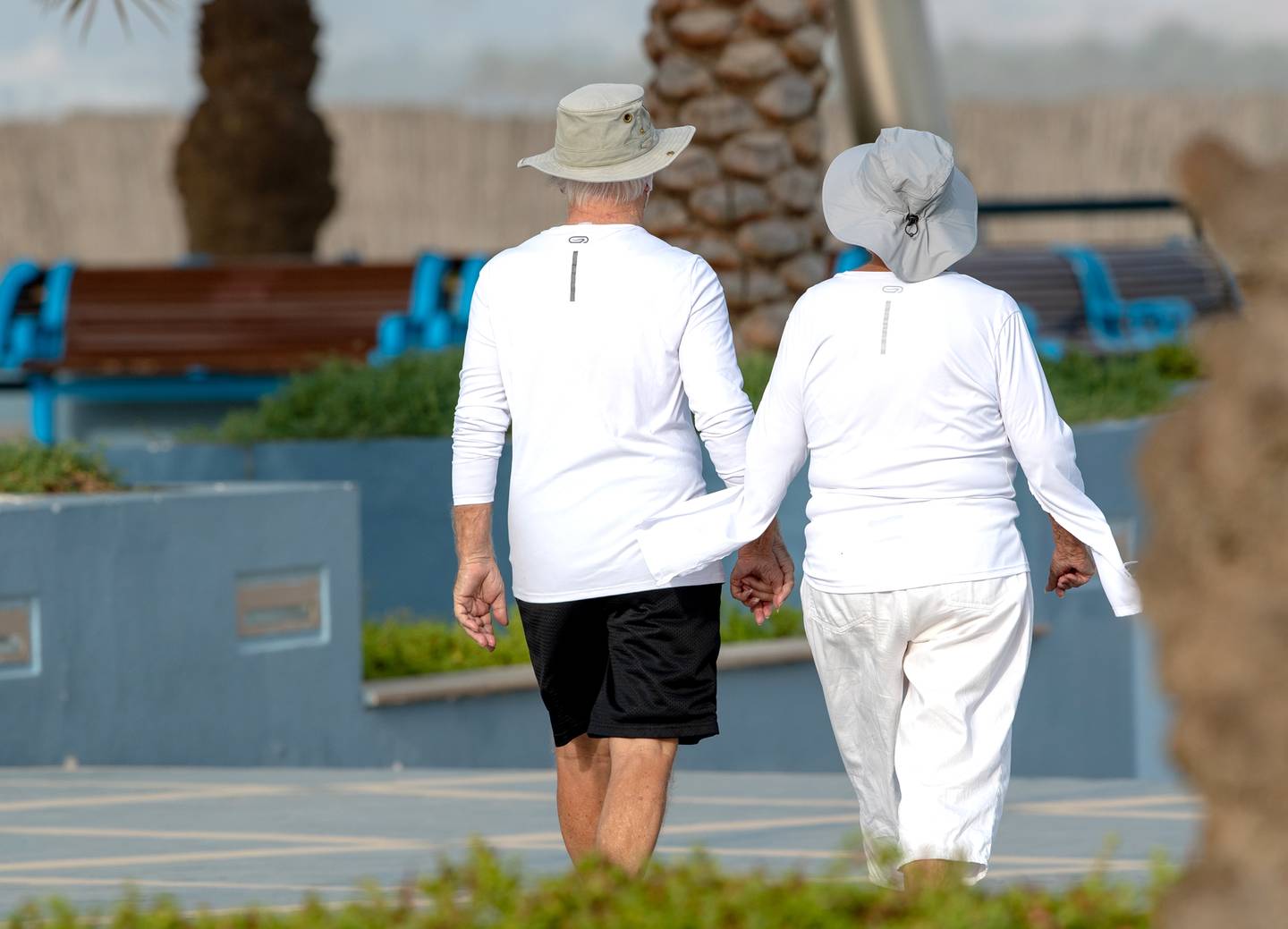 Experts believe we can all live longer and happier lives. Victor Besa / The National

The frontiers of medicine and biology are moving from extending lifespan to improving “healthspan”, described as the period of life spent in good health, free from the chronic diseases and disabilities of ageing.

The goal is to slow the advance of adverse aspects of ageing to a point where our healthy years can extend far beyond what is possible today.

Verseon, an American company whose California headquarters are next to those of electric vehicle maker Tesla, is in the vanguard of that approach.

Founded in 2002, it has spent the past 20 years developing the fundamental scientific advances necessary for discovery of medicines. The company is releasing products that have the potential to transform how we delay, prevent, and treat disease.

Its chief executive and co-founder is Adityo Prakash, who earlier in his career was responsible for technologies at the heart of all video streaming today, from Amazon Prime to Zoom.

“We are talking about not living too much longer but living better,” he said. “We are doing our part to give humanity the healthier future it deserves.

“As we advance and progress to be able to master our environment, as we do in science and technology, and master our own bodies, so we can stay more productive.

“We are developing this suite of things that can change how healthy and long you live. We can personalise what you need, so in time every individual can enjoy bespoke treatment.

“We are not talking about a fountain of youth that will make us live for ever,” Mr Prakash said.

“But wouldn’t all of us much rather have a longer, healthier life and a short decline, instead of a long, gradual decay?

“We are in clinical trials and have developed to date 16 drug candidates across eight major disease areas in the past five years. That is unthinkable [speed of progress] in the pharma paradigm. These are all completely novel chemicals that you can’t find with current pharma methods. ”

But how? Verseon felt that the only way to design new drugs would require building a system that can use molecular physics to accurately predict how a new chemical structure will bind to a disease-causing protein.

It creates drugs atom by atom, using a proprietary technology platform that goes far beyond just the application of artificial intelligence and involves complex data science. 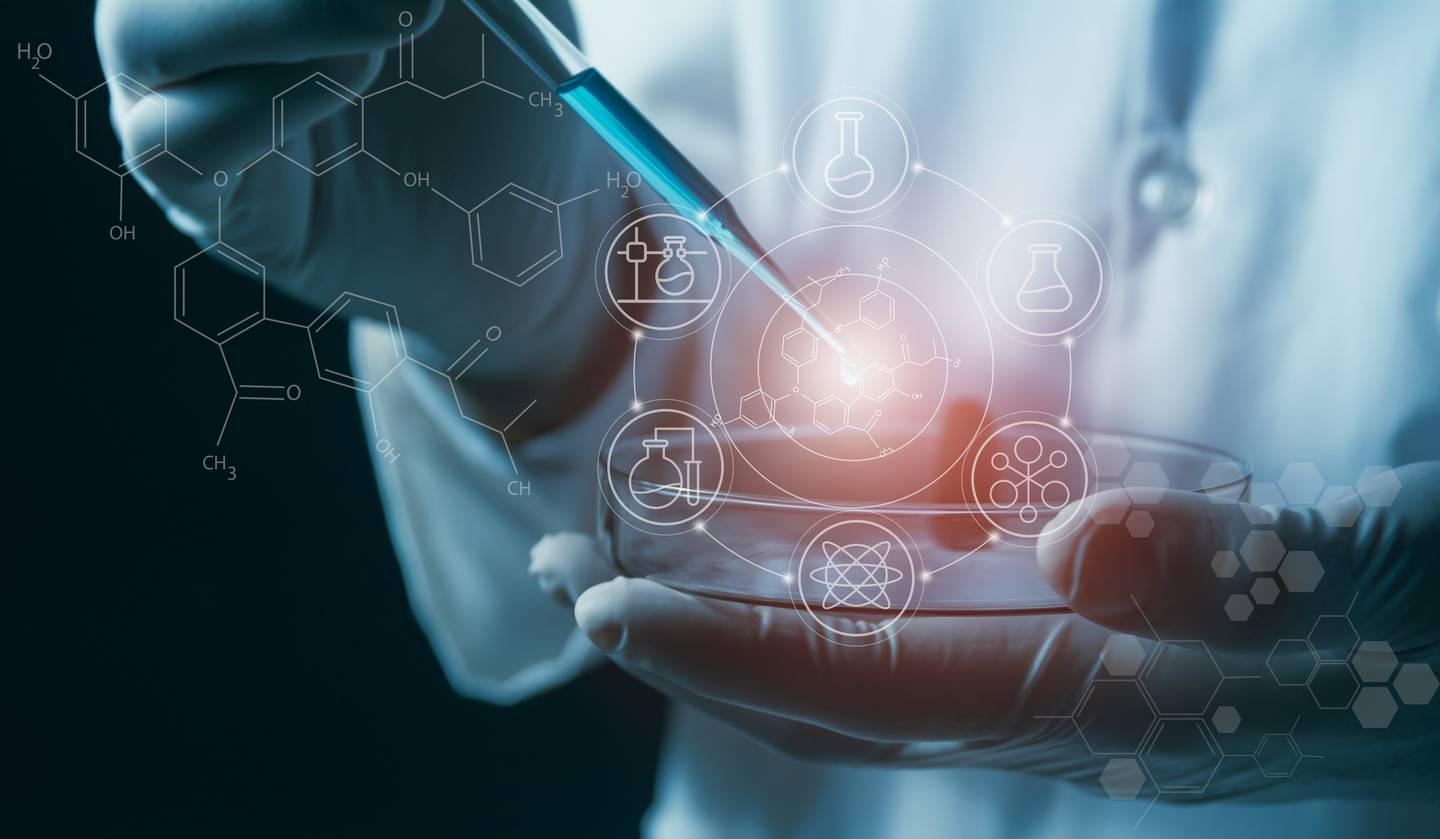 American company Verseon is working to develop new medicines to prolong lives and extend our span of good health.

Among drugs in clinical trials is one with low bleeding risk to treat and prevent heart attacks and strokes. There are three different cancer programmes under development, as well as an oral drug to treat diabetic vision loss, which would replace the need for injections into the eye.

That is particularly relevant in the Middle East. Figures from the International Diabetes Federation show that one in six people in the UAE has diabetes, which is prevalent throughout the Middle East.

“It is the biggest hot spot in the world in terms of the percentage of the population with diabetes or pre-diabetes,” Mr Prakash said.

“Diabetes predisposes you to other sorts of problems such as organ failure, heart attacks and strokes. If anyone has diabetes for any length of time there is a very good chance they will go blind.”

The cause he said was the infiltration of the western diet into the Middle East.

“The dramatic rise in prosperity in the Middle East has thrust the western diet into the region, including processed foods and sugars.

Paving the way for longer lives

“We showed our oral development to the health minister in Bahrain in September and she said it could change the lives of hundreds of millions of people on the planet. She is right.”

Mr Prakash is scheduled to travel to the Middle East next week. “There’s real interest in becoming involved in our work. There are many people looking at this across the Middle East and we are trying to build the right network of relationships. We are selective. We know the value of what we have built.

“Our plan is to have the industry’s largest, most dominant pipeline of therapies within 10 years. We should be basically the dominant engine for the future of medicines. Some people have said what we are building is Tesla for the pharma industry. ”

As Saudi Arabia diversifies away from oil as part of Crown Prince Mohammed bin Salman’s 2030 vision, the kingdom is taking giant strides in the field of human longevity and investing billions of dollars.

The Hevolution Foundation set up last year is a non-profit organisation dedicated to overcoming what it calls “one of the greatest challenges facing humanity”.

Its website states: “Medicine has not kept pace with ageing or the growing old population who are most vulnerable to disease. It’s time to focus science and business on ageing as a treatable process, not just on its terminal symptoms.”

Its mission, the foundation said, “is to drive efforts to extend healthy human lifespan, or healthspan, and to better understand the processes of ageing, because the simple truth is: we all age, but we do not all age equally”.

It has an annual budget of up to $1 billion to accelerate science and bring therapies to market.

For Prof Whitson, the concept of living longer is a relatively recent development.

“The human lifespan had not changed that much for thousands of years, but in the last 50 it has jumped.

“That big jump has been in controlling chronic conditions; medical advances have meant one can live with these conditions such as diabetes and heart disease for a much longer time.”

She points to a field called geroscience, which connects the biology of ageing with the biology of disease. By treating ageing, not just age-related disease, human beings may stay healthier longer.

“There is a lot of interest at the moment in those approaches. There is also a process called senescence — the condition or process of deterioration with age. There are what we call the four M’s — mind, mobility, medication and matters most.

“Shifting our focus to what we refer to as the pillars of ageing and the pace of it holds a lot of potential promise and reward.

But to live for ever? Immortality? “I may be proven wrong and it could be 500 years from now people could routinely be living to 200, but I really don’t think so. I don’t think we could stretch the human lifespan much beyond 150. And if people are going to routinely live to 150 then the retirement age cannot be 65.”

That is an altogether different question.